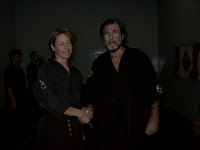 I Love Wikipedia! I just zoomed over there to look up the genus of “irony” and found featured on the home page the history of Aiki Jujitsu the martial art I practiced! It’s rare to ever find references to it. Since moving to a new city, I have been missing my Sensei, Ric Cameron. He knows so much about the history and principles of the art as well as the practice.

Being “poor student” I have not retained nearly as much as I would have liked about the art. Takeda Sokaku innovated Aiki JuJitsu just prior to the turn of the 20th century. The Ju Jitsu part is mostly about joint locks and bone crunching techniques. But where things get interesting is in the Aiki part.

This quote* from Sokaku’s son Tokimuni, “Aiki is to pull when you are pushed, and to push when you are pulled. It is the spirit of slowness and speed, of harmonizing your movement with your opponent's ki. Its opposite, kiai, is to push to the limit, while aiki never resists.” (Read about my conversation with a buddhist monk tomorrow for more on this idea).

Aiki Jujitsu greatly influenced Aikido founded by Morihei Ueshiba. My life continues to be informed by Aikido’s main precept which is: “to fight so that no one will lose”. I admire the wisdom inherent in that phrase. The philosophy behind Aikido is that of the skilled warrior first being compassionate.

Wow. Imagine that! How would global conflict change if our warriors’ first skill were compassion?

I see corporations moving to this stance of fighting so that no one will lose. Instead of Competition being the main driver, Cooperation and Collaboration is emerging. Instead of “us against them”, there is “us with them” mentality that is more pervasive. The Gen X’ers have insisted--in fact they would say “Us IS Them”. And Boomers looking for more meaning in their lives are searching for a new alignment of the personal and meaningful with corporate vision and mission.

(Except maybe in broadcasting and online video distribution)/